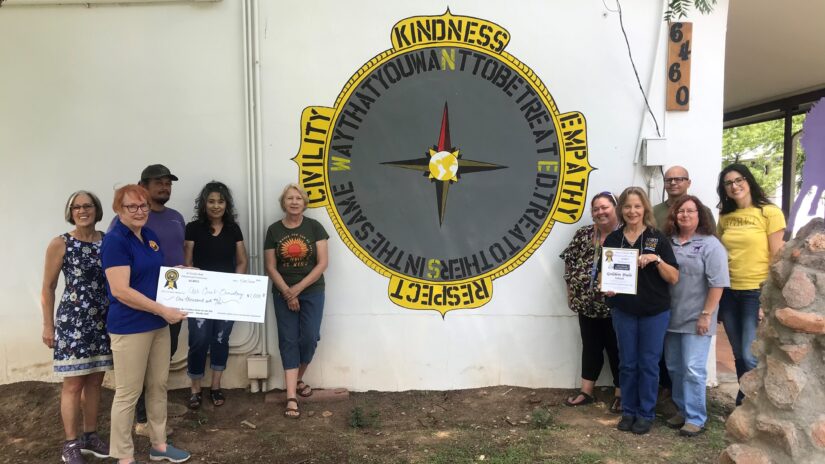 Road trips are always full of pleasant surprises and a recent road trip to the southern stretch of Arizona was no exception.

Pearce was one of over 48 stops to schools throughout Arizona, recently made by AGREE – Arizona Golden Rule Educational Experiences. The purpose of these visits was to introduce character experiences that use the universal Golden Rule, treating others the way you want to be treated, in classroom education.

In a Golden Moment, Principal Shepard of Ash Creek Elementary, who had been considering the Golden Rule as her character outreach, realized the AGREE program was just what she was looking for. It was impressive that she scheduled a training session with AGREE for all her staff, including teachers, maintenance, bus drivers, IT and the custodian. She knew it would take a team and wanted everyone on board to become examples of the Golden Rule.

Next, they engaged the students by teaching them about the Golden Rule through various educational experiences. As Ash Creek Elementary teachers included these embedded “golden” messages in lesson plans encouraging students to treat others the way they would like to be treated, they began to see changes.

One young student shared how she decided to treat a fellow student she had a hard time getting along with the way she would want to be treated. As a result, he responded positively to her, they became friends and additionally, he began making more friends!

Another Ash Creek Elementary student noted the positive effects that the Golden Rule had on his classmates and on the campus as a whole. He felt like no one should be “forced” to live the Golden Rule but he saw how those who did live it received more respect from others. In addition, teachers witnessed moments in the classroom where students identified when they were living the Golden Rule on their own accord, sharing how good it made them feel.

Ash Creek Elementary held a celebratory assembly to recognize school-wide efforts to become a Golden Rule School. During the assembly, staff and students shared works of art that expressed personal experiences with the Golden Rule. At the end of the assembly, staff and students took the AGREE pledge to live the Golden Rule by applying the four words; Kindness, Empathy, Respect and Civility. The excitement and resolution was felt by all. Ash Creek Elementary was chosen by AGREE as the 2021 Arizona Golden Rule School and was featured on AZTV, Channel 7. Their story can be seen on www.aztv.com and www.azGoldenRule. org. They received a $1,000 check to support them in continuing Golden Rule educational efforts.

As you walk across the beautiful Ash Creek Elementary campus, the walls are painted with “golden” images and messages about kindness are visibly displayed; even the rocks by their public library are painted with positive messages! They’re working to live the Golden Rule as a school family and team. AGREE applauds the students and staff of Ash Creek Elementary. May their golden efforts bless their lives well beyond their school years and have a positive impact in their communities!